We're all on the journey.

Confidence: How to Overcome Self-Doubt, Insecurity, and Fears

When you were a child, were you ever told not to talk to strangers, or maybe you were told not to take candy from strangers or go anywhere with a stranger? If you were, that's probably a good thing because that means that you might have grown up in a place where child abductions could happen - and that you had parents who wanted you to stay around for a while. But when you got older, did anyone ever sit you down and explain to you that strangers, in general, aren't dangerous, that people are mostly nice?

Did they help you get comfortable with your ability to understand whom you might need to stay away from and whom you don't need to be afraid of?

In other words, did they help you become confident that you would know which strangers to interact with and which not to? If your answers to these questions are no then you are in the same boat as the majority of the world and if someone did that for you, that's great and you were lucky but since you're taking this course, I'm going to guess that even so there were other areas of your life where they didn't do that.

This is only one of the hundreds of examples of rules that we learn as children that tend to hold us back even as adults. They are the rules that have created what's known as the superego in psychology. In psychology, the superego is defined as the part of a person's mind that act as a self-critical conscience, reflecting social standards learned from parents and teachers and your superego loves to tell you not to do anything that even gets close to challenging the rules you learned as a child not because it's trying to protect you or even because the rules always make sense but simply because the superego's only job is to get you to do the things you do in the way you've always done them.

That's all it cares about and that's all it does and it does this by being that little voice in your head that tricks you into thinking that you're listening to your thoughts, to your reasoning, to your intelligence. I often say that the superego's greatest trick is to convince you that it is you but it's not.

- In short, your superego is self-doubt, and it’s usually controlled by your emotions.

The superego tries to perfect and civilize our behavior. It suppresses all id's unacceptable urges and struggles to make the ego act upon idealistic standards rather than on realistic principles. The superego is present in the conscious, preconscious, and unconscious.

There are two ways in which your superego can communicate with you. It can speak to you through that voice in your head, the one that tells you that you're not good enough, smart enough, or funny enough to do what you want to do or it might tell you that people will reject you, laugh at you, or ignore you.

It could even tell you how you'll feel in the future if you try something and fail. In other words, your superego is your self-doubt and can also speak to you through emotions. It happens when you have no logical reason for not wanting or being able to do something, but just the thought of doing it makes you feel anxious, uncomfortable, and possibly even ill.

Does any of that sound familiar? Knowing these things aren't coming from you is a huge relief, isn't it?

They're not coming from your reasoning, your logic, or your intelligence. They're also not coming from the outside world or the future. They're simply coming from an automatic process in your brain that has been put there through the lessons you learned as a child. That's it. Your superego is working off of old habitual thinking that simply needs to be updated.

Your superego simply warns you not to talk to strangers - because they might kidnap you - whenever you feel nervous about meeting a stranger or worrying about a job interview. Most of the time, this happens when you are dealing with strangers who have something you want, like a job, status, authority, or attractiveness. However, your superego doesn't say kidnap because that doesn't work as well anymore in most situations.

The majority of people would not be worried about that during a job interview. Rather than kidnapping, it says reject, makes fun of, dislikes, judge, or anything your superego can use to hold you back, no matter how unrealistic it may seem. After learning where most of our self-doubt stems from, let's move on to discuss how to overcome it.

How to train your superego and remove self-doubt:

- You don’t have to have superpowers to train your superego.

Suppose you want to share an untraditional idea with your colleagues at a big meeting. When you're calm and comfortable, perhaps relaxing at home while thinking about it, you're thinking about sharing this idea with all your colleagues. But if those thoughts change when you start to feel nervous or stressed, then those new thoughts are being fed to you by your superego.

So if you go from thinking that sharing your idea is a good thing to do when you're calm and comfortable to think that it's a really bad idea when the meeting starts and you start feeling a little nervous, that is your superego talking to you. And you have to be careful because your superego can be very convincing. It will often have all sorts of reasons why you shouldn't do it, and at the moment, those reasons will seem perfectly reasonable. But if you listen to them, odds are that you'll regret it later. So how do we change the superego so that it stops standing in our way and starts supporting us?

Well, we simply have to use what we’ve already learned in this course. By working on your growth zone exercises, you'll start to change your superego because the superego learns from experience and nothing else. We can't reason with it, we have to show it. So when you start to get more experience doing things you traditionally haven't done or doing old things in new ways, your superego starts to adapt to it. And once your superego is accustomed to this new way of doing things, it will stop serving up those self-doubting thoughts and your innate confidence will come to life. So here's your exercise.

Think about something you can do today or tomorrow that is very likely to make you feel a little stressed or nervous when it's time to do it. Then go do that thing and pay attention to how your thoughts change from what they are right now when you come up with the idea to what they are when you're there doing it.

Start with something small and easy. This isn't about taking a huge step forward. It's just about learning the difference between your reasoning and your superego. 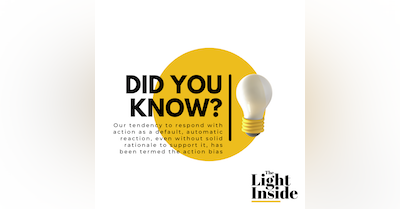 The action bias describes our tendency to favor action over